Mikdad , Jaishankar discuss Syrian-Indian relations and ways of developing them 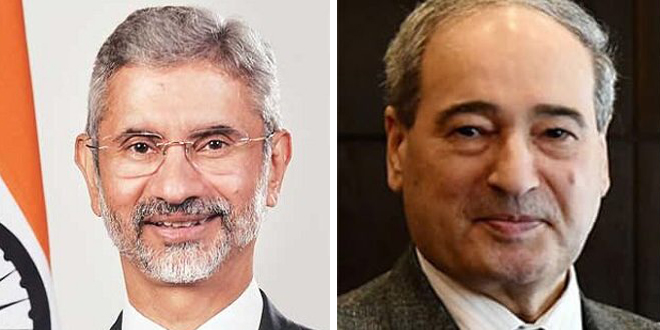 Damascus, SANA – Foreign and Expatriates Minister, Faysal  Mikdad, discussed on Friday with Indian External Affairs Minister, Subrahmanyam Jaishankar, the  situation in the region and international arena, in addition to  relations between Syria and India, and means of  developing  them in a way that serves the joint interests of the two friendly peoples.

Jaishankar, in a telephone call with Mikdad, conveyed the greetings of Indian Prime Minister, Narendra Modi to President Bashar al-Assad and his wife, and his wishes for a speedy recovery from infection with the Covid-19 virus.

The Indian Minister, on behalf of his government, expressed solidarity with the Syrian Arab Republic in the face of current challenges left by the terrorist war and the negative repercussions caused by Coronavirus, especially the  economic challenges, stressing the necessity to enhance cooperation between the two fraternal countries.

He pointed out that his country, which recently became a non-permanent member of Security Council, is committed to UN Charter and international law, for the benefit of peoples in the world, adding that the stance of India towards Syria is stable that stems from independent historical relationship between the two countries based on ties of friendship and respect.

In his part , Mikdad thanked the Indian Minister for his  good feelings, expressing appreciation for India’s supportive stance to Syria in its war on terrorism and his gratitude for the assistance sent to Syria in the last period to face the repercussions of Corona.

Minister Mikdad stressed the necessity of pushing forward bilateral relations and enhancing the horizons of constructive cooperation in a way that promotes  these relations up to  the aspirations of the two friendly peoples.