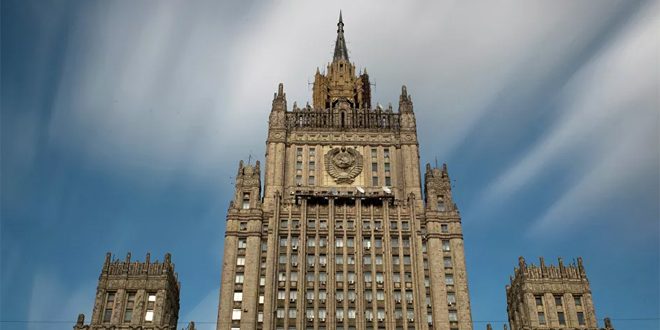 Moscow, SANA – Russian Foreign Ministry affirmed on Friday that the crisis in Syria was the result of external interference in its domestic affairs, noting that this intervention depended on international terrorism, particularly the military and economic ones.

“The countries which have directly participated in the crisis practice double standard policy and support forces that reject dialogue to resolve the crisis including terrorist organizations, stressing that these countries should bear the primary responsibility for the continuation of this crisis.” The Ministry said in a statement.

The statement noted that the Russian policies toward Syria were and still depend on respect for the country’s sovereignty, independence and territorial integrity, affirming that Russia made a decisive contribution to defeating the terrorist organization of “Daesh” and inflicted losses on other international terrorist organizations in Syria.

It  stressed that Moscow which takes a firm stance against international terrorism with all its forms, is determined to its support for the political process led by the Syrians themselves in accordance with Security Council Resolution No.2254.

The statement stated that Russia is convinced in the necessity for the Syrian parties to reach a common vision for the country’s future without any external pressure ,stressing the need for the international community to provide appropriate conditions for the return of the displaced Syrians to their homes.