Ambassador Ala: Syria has confronted terrorism sponsored by regional and international sides 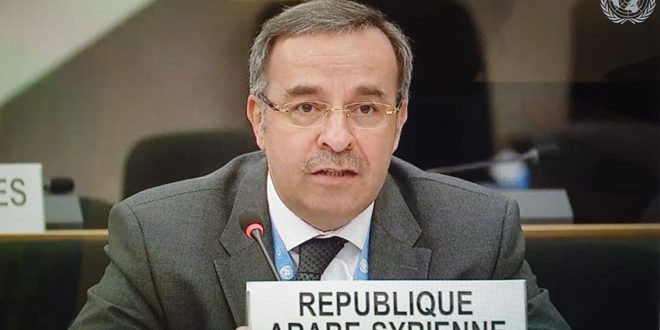 Geneva, SANA-Syria’s permanent representative to the UN in Geneva, Ambassador Hussam al-Din Ala, affirmed that Syria, during the latest years, has faced a systematized terrorist campaign that targeted and posed threat to its unity and territorial integrity.

“ Syria has confronted an economic siege that affected the basic sectors in the country, and an occupation that looted its natural resources,” Ambassador Ala said in an interposition to so-called “the interactive dialogue with the Inquiry commission on Syria” within the agenda of 46th session of the Human rights’ council.

He called for an immediate removal of the unilateral coercive measures imposed on the Syrian people, these measures which violate the human rights and obstruct the work of international humanitarian organizations.

The Ambassador said that the Commission and its reports failed to come out with any credible results because it failed to address the challenges facing Syria and the real reasons behind the suffering of the Syrian people.

“During the latest years, the Syrian government has done its duty to protect its citizens from the crimes of terrorist groups and from US, Turkish and Israeli occupation whose practices pose threat to sovereignty, unity and territorial integrity of the Syrian state and a source of continuous human suffering to its people,” Ambassador Ala said.

He added that in the northeastern regions of Syria, the US occupation-backed QSD militia continues to steal oil and wheat and smuggles them to outside through illegitimate corridors, and the separatist militia perpetrates organized violations of human rights and suppresses protesters demanding the return of state institutions and impedes the work of humanitarian organizations.

“ Terrorist organization of Jabhat al-Nusra in Idleb perpetrates flagrant violations of human rights under the protection of the Turkish regime, the guarantor of the terrorist groups, and it continues to use civilians as human shields and prevents people from heading for the humanitarian corridor opened by the Syrian government,” Ala added.

He concluded by saying that the US and EU statements stress that the aim of unilateral coercive measures is to starve the Syrian people and punish them for their political choices.