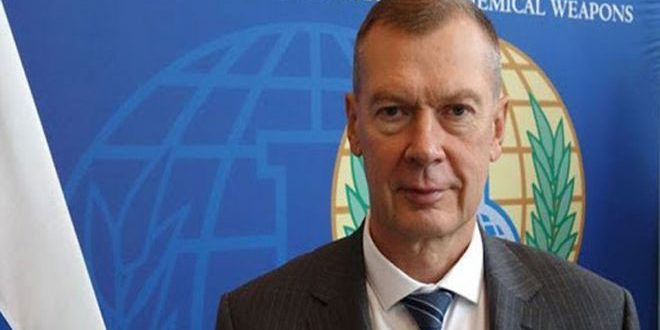 The Huge, SANA- Russia has expressed concern over the discussions taking place in the Organization for the Prohibition of Chemical Weapons (OPCW) regarding the allegations of Syria’s use of chemical weapons, calling on the organization to work within the framework of the Chemical Weapons Convention and to abandon remote, unrealistic and suspicious investigations.

A few days ago, Russia demanded the Organization for the Prohibition of Chemical Weapons to conduct an honest and reliable investigation into the alleged chemical attack in the city of Douma in Damascus countryside in 2018, stressing that the success of the organization’s work depends on this matter.

The Russian TASS news agency quoted Russia’s Permanent Representative to the OPCW Alexander Shulgin as saying during the 96th Session of the Executive Council of the OPCW on Tuesday in The Hague that the manipulation revealed in the final report on the alleged incident in Douma caused serious harm to the organization, calling on the technical secretariat to consider what happened because the silence, and belittling issues cast doubts on the work of the fact-finding mission and other incidents in Syria.

WikiLeaks has previously published four documents leaked from the OPCW that exclude the use of chlorine gas in Douma, and reveal that toxicologists have ruled out that deaths were due to exposure to chlorine.

Shulgin indicated that Russia is concerned about how things are going in the organization, stressing that Syria is showing openness and unconditional willingness to close cooperation with the organization’s technical secretariat, as evidenced by the next round of bilateral consultations held the previous day.

“But there are forces trying in an artificial way to slow down the removal of issues from the agenda, which has exhausted the debate around it, and they are making demands on the Syrians that are not imposed on other countries through the double standards,” Shulgin added.

Shulgin said that Russia supports cooperation between Syria and the OPCW because such nature of work would facilitate the search for solutions to all open issues related to the Syrian declaration, pointing out that with the political will of all participants in this process, more gradual progress can be made in this regard as the recent closure of a number of important issues has shown that it is necessary not to shift the focus towards negative trends, but rather to encourage positive dynamics on this path in every possible way.