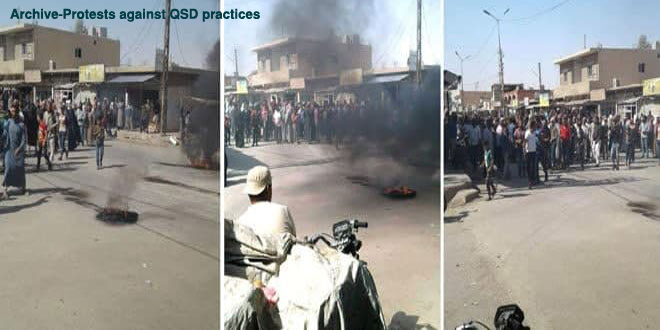 Raqqa, SANA- Over the past 24 hours, the US occupation-aligned QSD militia kidnapped more than 100 young men in Raqqa city and its southwestern countryside.

Local sources told SANA that QSD militants set up checkpoints on the main roads and at the entrances of Raqqa city, and the two areas of al-Tabqah and al-Mansoura in the southwestern countryside.

The militants also kidnapped more than 100 persons and took them at gunpoint to training camps to fight among their ranks forcibly.

During the last two days, an armed group of QSD militia has carried out ambushes near a number of mosques of villages in Raqqa province, and they kidnapped more than 200 young men to force them to fight among its ranks as part of the so-called (compulsory recruitment) in the areas where the American occupation and the militia are deployed.