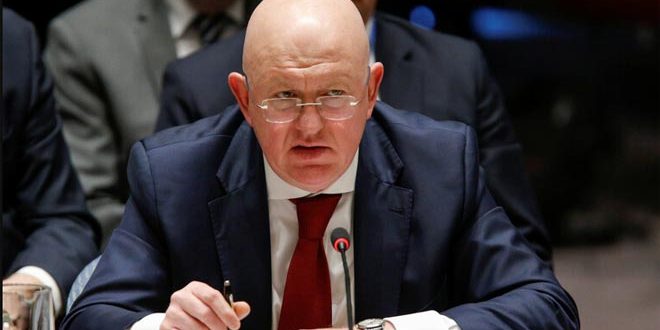 New York, SANA- Russia reiterated that Syria has fulfilled all its obligations towards the Organization for the Prohibition of Chemical Weapons (OPCW) regarding the so-called “chemical file”, noting that the Western countries continue to use this issue as a tool to exert pressure on the Syrian government.

“Syria voluntarily joined the OPCW and fulfilled the basic provisions under the Chemical Weapons Convention, and it eliminated its entire stockpile since 2014,” Novosti quoted Russia’s permanent representative to the UN Vasily Nebezia as saying in a speech to Security Council via video.

Nebenzya added that some countries continue to use the “chemical file ” as a tool to pressure the Syrian state and direct “serious accusations” against it again and again, pointing out that the number of evidence of fabrication, manipulation and violations within the OPCW Technical Secretariat exceeded the dangerous level.’’