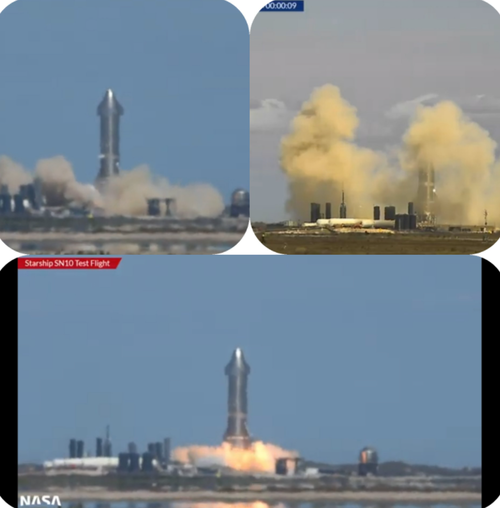 Update (1845ET): After initial delays, SpaceX successfully landed a Starship prototype after a high-altitude flight test for the first time on Wednesday, marking a major step forward for Elon Musk’s company in the rocket’s development.

But minutes after softly landing on a concrete pad, the prototype rocket exploded. The cause of the explosion, or whether or not it was intentional, was not immediately clear.

Update (1543 ET): About a half-hour after Elon Musk tweeted to his 48.4 million followers: “5 mins to Starship test flight attempt” – 30 minutes later, he follows up the tweet with an explanation behind the aborted launch:

Musk does say another launch could happen later today.

Update (1524 ET): NASASpaceFlight.com’s commentators on the “LIVE: Starship SN10 Flight Test” live stream launch of the SpaceX’s Starship said an “auto abort” has occurred. The reason has yet to be determined.

SpaceX is evaluating whether it can try again today to launch the Starship test flight from South Texas.

Here are images of the aborted test flighted.

SpaceX is preparing to launch another high-altitude flight of Starship.

“SpaceX is set to launch the Starship SN10 prototype to an altitude of approximately 10 kilometers. A launch attempt is possible between 9 am and 6 pm Central time on Wednesday. However, as with testing, there is always a chance that teams could decide to stand down and try again on a different day,” said NASASpaceFlight.com