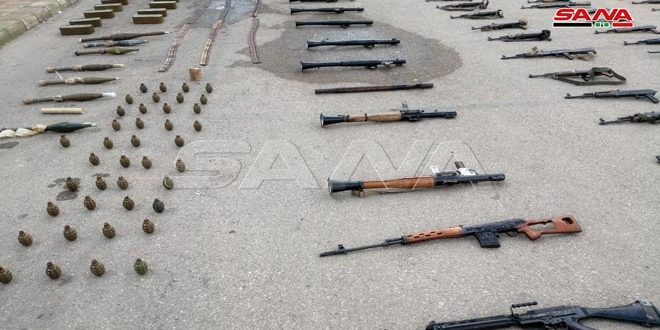 Daraa, SANA- The competent authorities seized on Wednesday light and medium weapons and varied ammunition left behind by terrorists in Daraa western countryside.

A field commander told SANA reporter that “while searching the farms in Daraa western countryside, an amount of weapons and varied ammunition was found, some of which had been prepared to be smuggled and some to be sold.”

He noted that seizing the weapons was done thanks to the “fruitful cooperation between the authorities concerned and the locals in the province.”

He noted that the competent authorities will continue to comb all the areas in the province and to remove all the weapons and ammunition left behind by terrorists and will “confiscate all the illegal weapons, and this will contribute to preserve the safety of the citizens and the homeland.”