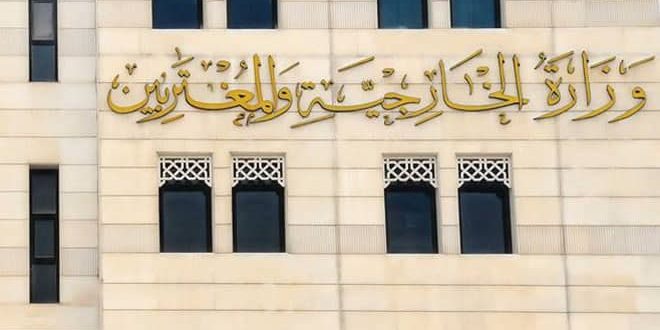 Damascus, SANA- Foreign and Expatriates Ministry said that Syria has repeatedly called on Security Council to condemn the Israeli attacks on sovereignty and safety of its territories and take decisive and immediate procedures to stop these attacks and hold the Israeli occupation entity accountable for the attacks.

“This new aggression comes two days after  US air coward aggression on Syrian sovereignty in Deir Ezzor province on the Syrian –Iraqi borders in light of the support and protection of the US successive administrations and some western countries to Israel ” Foreign Ministry said in a letter addressed to UN Secretary General and president of Security Council.

The Ministry added that the Israeli enemy carried out its flagrant attack, based on systematized allegations and lies that are being used by all aggressors against Syria’s sovereignty, including the US and Israeli occupion.
It affirmed that those pretexts are nothing but open attempts to practice misleading and distort the facts and to cover Israel’s responsibility for its dangerous aggressive approach, its practicing of state terrorism and its continuous support for armed terrorist groups.