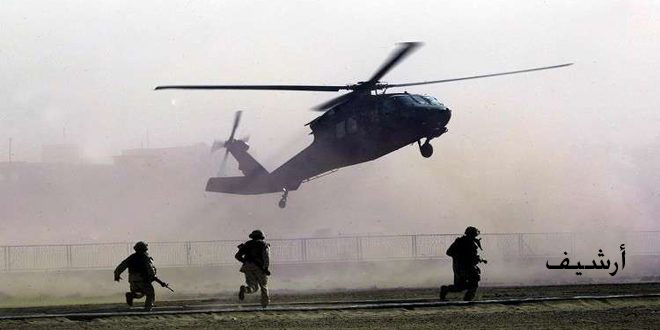 Hasaka, SANA- US occupation forces on Sunday transported 10 terrorists affiliated Daesh terrorist organization, via helicopters from its military base in al-Shadadi in Hasaka countryside towards al-Badia in Deir Ezzor.

Local sources told SANA that 10 of Daesh terrorist organization members were transported via two helicopters affiliated to the US occupation forces from the illegitimate al-Shadadi base in Hasaka southern countryside and headed towards al-Badia in Deir Ezzor.

The sources added that the ten terrorists were previously removed by the occupation forces from the Industrial Secondary Prison in 26th of the current month to its base in al-Shadadi.

A number of US officials visited, during the past months, the Industrial Secondary Prison in Ghuwairan neighborhood in Hasaka city, which encompasses thousands of Daesh terrorists, most of them from foreign nationalities, as it also witnessed a fabricated and planned escape operations for a number of terrorists, in addition to that the prison has witnessed disobedience and rebellion cases inside it which were all controlled.