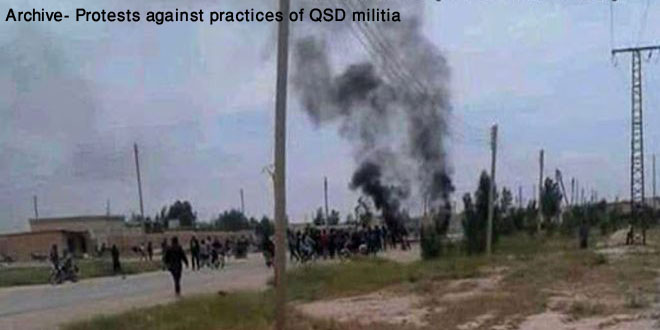 Raqqa, SANA- Locals of Shannan village in Raqqa eastern countryside took to the streets in protest against the practices of US backed-QSD militia, in condemnation of plundering the oil resources in the Syrian al-Jazeera and continuing to kidnap the young men to force them to fight in their ranks.

In response to QSD militia’s criminal practices against people, its continued looting of the resources of their area, scores of the locals of al-Shannan village in Raqqa Eastern countryside demonstrated in protest against these practices, calling to stop the crimes of this militia against the locals and stop kidnapping of young men, particularly the teachers, to recruit them forcibly in its ranks, local sources told SANA on Thursday.

The protesters, who cut off the main roads amid a public strike and closure of the markets, called for putting an end to the Militia’s practices and confiscation of the locals’ properties, in addition to stealing and smuggling the oil.

The areas of Raqqa and Hasaka countryside witness demonstrations in protest against QSD gunmen crimes and kidnapping the young men of the villages’ in Raqqa countryside, as well the compliance of this militia to the orders of US occupation troops.