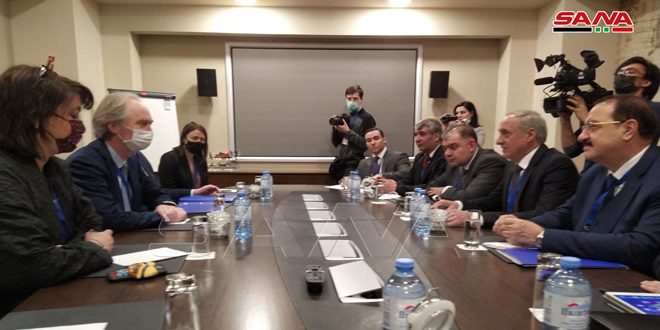 Sochi, SANA- Syrian Arab Republic delegation, headed by Ayman Sousan, Assistant Minister of Foreign Affairs and Expatriates, held a meeting with the Russian delegation, headed by special envoy of Russian President to Syria, Alexander Lavrentiev, in the framework of the 15th International Meeting within Astana format held in Sochi.

During the meeting, there was an agreement about the importance of continuing work within the framework of the Astana process which achieved positive outcomes. Sousan stressed that the process could achieve more outcomes if the Turkish regime committed to its obligations and understandings reached earlier with the Russian side.

Following discussions that focused on the developments in Syria since the last Astana meeting and breaches committed by terrorist organizations, based from the de-escalation zone in Idlib, the two sides affirmed their determination to fight terrorism and expel it from all Syrian lands.

They also held talks on the humanitarian aid in Syria and the need to be provided without external preconditions, the economic situation in light of illegitimate unilateral coercive measures.

Both sides stressed that the political track must be owned and led by Syrian leadership without external interference.

The Syrian Arab Republic delegation also met UN special envoy for Syria, Geir Pedersen on the situation in Syria. Sousan stressed the importance of eliminating terrorism and ending the illegal foreign presence on Syrian territory because it is the main obstacle to the return of stability in the country.

The talks also dealt with the humanitarian situation in Syria, with Sousan urging the United Nations “to raise voice loudly against the coercive measures targeting the Syrian citizen in his livelihood” and the need to stop and condemn the measures adopted by some separatist groups in Hasaka and Qamishli.