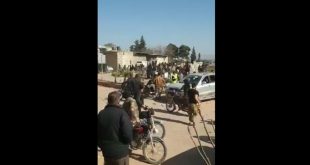 Local sources told SANA that a car bomb went off in one of the residential neighborhoods in Jandaris town, southwest of Afrin city as at least six civilians were injured, in addition to causing huge material damages to the place.

Afrin City and the villages in its environs where Turkish occupation-backed terrorist groups spread, have been witnessing a state of chaos and insecurity and conflicts among these terrorist organizations and their leaders over dividing the areas, and controlling the fate of the civilians in them.