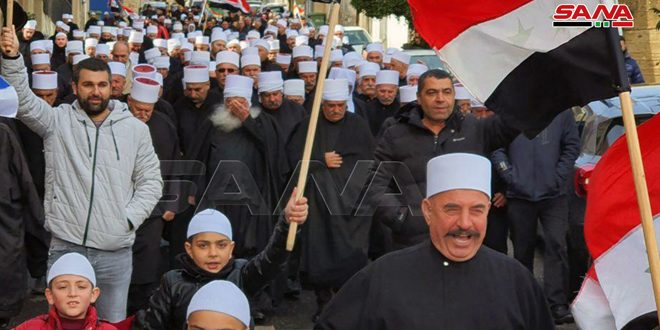 Quneitra, SANA-Citizens of occupied Syrian Golan renewed their adherence to their Syrian national identity as well as their determination to confront all practices of the Israeli occupation entity in the occupied Golan until liberating it.

On the 39th anniversary of the national strike held in rejection of the ill-fated Israeli annexation decision, the Syrians in Golan stressed in a statement their resistance and struggle to confront all the occupation schemes as well as their standing by the Syrian Arab Army till the complete liberation of the occupied Syrian Golan.

“On February 14th anniversary, we are inspired by determination, will and steadfastness to confront and thwart all the Israeli occupation schemes, on top, the settlement and destructive scheme represented by establishing the huge wind turbines”، Golan’s citizens added in the statement.

On Feb 14th ,1982, the Syrians staged a general strike that lasted 6 months in rejection of the annexation decision.