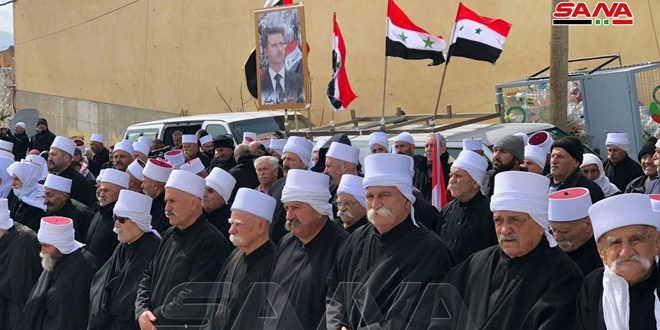 Damascus, SANA- Syrian citizens in the occupied Syrian Golan commemorate the 39th anniversary of the open strike tomorrow against the Israeli null decision of annexation .

On this day, the Syrians affirmed their adherence to the Syrian Arab identity and struggle against all Israeli settlement plans in the occupied Golan and determination to liberate the Golan completely from the Israeli occupation.

The open strike was organized by Golan citizens on the 14th of February 1982 in rejection of the Israeli occupation’s decision issued on December 14, 1981 to annex the occupied Syrian Golan and impose Israeli laws on its people.

Citizens of Golan rejected the imposition of the Israeli identity and the null annexation decision, affirming their adherence to their Syrian national identity and determination to resist the arbitrary occupation measures until the liberation of Golan and its return to the homeland, Syria.

The occupation forces, as soon as the strike was announced, imposed a military siege on the villages and towns in the Golan, preventing the delivery of food in an attempt to isolate them from the outside world and force them to end the strike and accept its laws.

The Syrians in Golan faced the unjust siege and occupation pressures with steadfastness, resistance and carried on fierce confrontations with the occupation forces, the most important of which was the identity battle that took place on April 1, 1982.