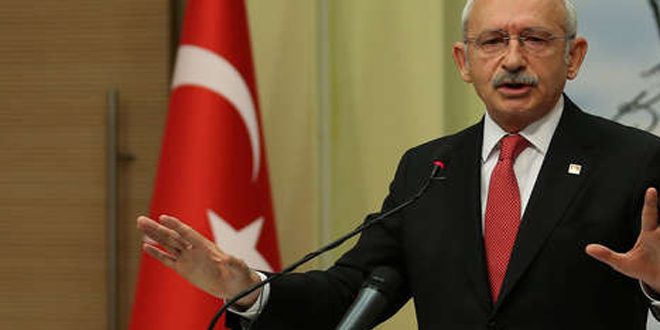 Ankara, SANA-Leader of the Turkish Republican People’s Party, Kemal Kılıçdarolu, said that the policy adopted by president of the regime, Recep Tayyip Erdogan, is corrupt, unjust, and treacherous, especially in the way of hunting his critics and opponents.

Kılıçdarolu added at a meeting of the parliamentary bloc in Ankara on Tuesday that during the 18 years of Erdogan’s rule, lies, hypocrisy, looting and theft of his regime prevailed, noting that the most important thing that he always thinks about is how to hunt his opponents and get rid of them so that he can tighten his control over the country.

Regarding to judicial institutions, Kılıçdarolu clarified that Erdogan sought to ensure that the judiciary was his deadly weapon against all his opponents, the last of which was the pursuit of security and justice against university students who opposed his decisions.

He pointed out that Erdogan has established an authoritarian regime that destroyed Turkey with all its institutions and destroyed democracy after thousands of civilians, on top, Politicians and journalists were imprisoned.