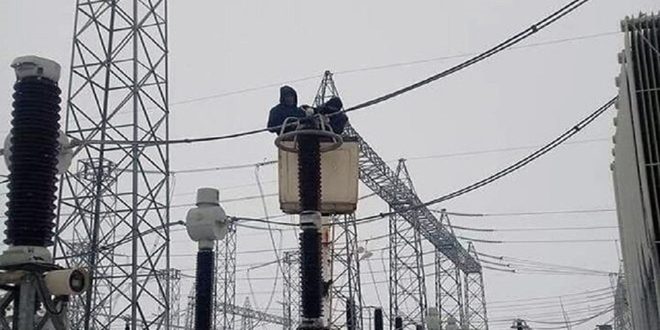 Hasaka, SANA- A number of villages in the northern and southwestern countryside of Tal Tamir have been suffering from the continuing power outage for more than a month due to the criminal practices of the Turkish occupation mercenaries who deliberately attack the electricity network and steal the transformers and high voltage transmission lines and prevent maintenance and repair operations.

In a statement to SANA reporter, Director of the General Electricity Company of Hasaka, Eng. Anwar al-Okleh, stated that al-Kozaliyeh village and three other villages in the southwestern countryside of Tal Tamir are fed with electricity through the lines coming from Mabruka power station which is located within the areas occupied by the Turkish occupation mercenaries, and it cannot be currently fed with electricity from Tal Tamir Station as this requires networks and towers, and they are not available currently.

Regarding the electricity situation in the northern countryside of Tal Tamir, al-Okleh said that ” The locals in 20 villages, which are fed with electricity through Zarkan / Mezri line, have also been living without electricity since the 6th of last January, as a result of the assault launched by the Turkish occupation mercenaries on Tal Tamir power station and the high voltage transmission lines feeding it”.

Turkish occupation forces and their mercenaries deployed in Ras al-Ain city and its countryside deliberately target the infrastructure and service facilities in the northern and western countryside of the province repeatedly to deprive the people of their services.