Jalali: US and its allies responsible for prolonging crisis in Syria 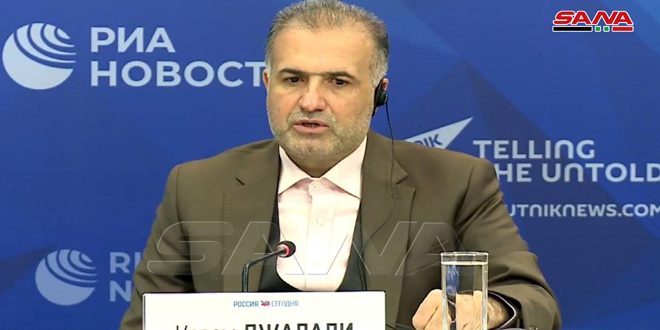 Moscow, SANA- Iranian Ambassador in Moscow, Kazem Jalali, affirmed that the US and its Western allies are responsible for prolonging the crisis in Syria and increasing the suffering of its people at a time of the outbreak of the Coronavirus pandemic.

In a response to a question by SANA correspondent in Moscow, Jalali said in a press conference via video technology on Thursday that “Terrorists backed by Washington and its allies have tried to establish hotbeds for them in Syria and worked to target it …in return, Russia and Iran are the main forces that stand by Syria in fighting international terrorism, and the extremist groups.”

He pointed out that the Americans despicably pillage the Syrian wealth, steal the plundered oil, and admit that publicly and rudely.

Jalali expressed his hope that the Russian and Iranian cooperation relations with the Syrian Government would continue to help the Syrian people get rid of all the economic difficulties facing them and to be able to remain resilient in the face of the unilateral measures imposed by the US and its Western allies.