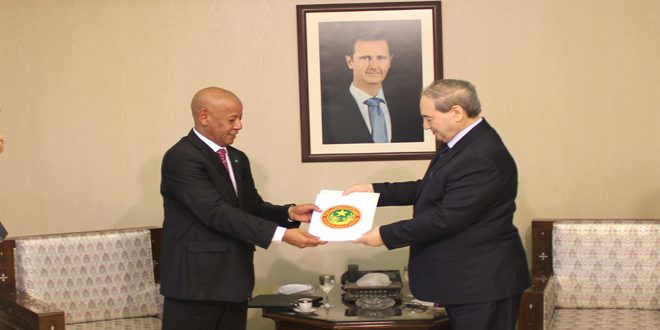 Damascus, SANA –Foreign and Expatriates Minister Fayssal Mikdad, on Wednesday received a copy of credentials of Ahmadu Adi Muhammad al-Razzi as an Ambassador of the Islamic Republic of Mauritania in Damascus.

Meeting the Mauritanian Ambassador, Mikdad welcomed Ambassador al-Razi as representative of his country in Syria, wishing him success in his mission in a way that serves the bilateral relations between the two countries and the interests of the two brotherly peoples.

Mikdad hailed the Syrian-Mauritanian relations, stressing the need for enhancing relations of cooperation between the two countries and moving the bilateral relations forward to reach their best levels.

He expressed Syria appreciation over Mauritania’s stance of support to Syria in its war on terrorism, asserting the need for unifying efforts and endeavors in facing the Western plans which aim at partitioning the states, especially the countries of the Arab region.

He also expressed appreciation and respect over the important role that Syria has played for consolidating the bilateral relations between the two countries, particularly in the field of scientific, students, cultural and economic exchange, hailing the level and efficiency of the Syrian universities.