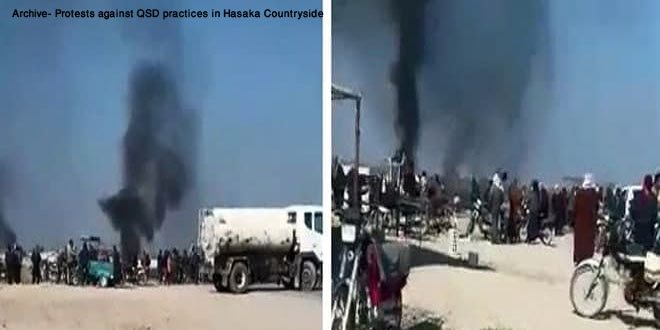 Havana, SANA- Syrian students who are studying at the Cuban universities and members of the Syrian community in Cuba have condemned the unjust siege imposed by QSD militia along with the US occupation on the locals in the cities of Hasaka and Qamishli.

In a statement, Syrian students and members of the Syrian community in Cuba affirmed that these practices are unethical and they are considered a war crime and a blatant violation of the UN Charter and human rights.

They called on the international community to move in order to lift the siege imposed on Hasaka and Qamishli and to stop the terrorist attacks against the locals.

The statement asserted that QSD bet on the US occupation is a losing bet, and this is what has been proven by the experiences and the history in the region, reaffirming that they stand by their steadfast Syrian people, their brave army and their wise and courageous leadership.

The statement noted that nobody will be able to undermine the will of the people and army of Syria which has been able to defeat all forms of aggression and colonization and has overcome all the ordeals which it has gone throughout history.

The US occupation-backed QSD militia continues its criminal practices against the locals in the areas which are under its control, in synchronization with imposing a tight siege on Hasaka city center and two neighborhoods in Qamishli, in addition to preventing the entrance of the vehicles, means of transport, foodstuffs, water tankers and other basic daily needs of the locals in the city.