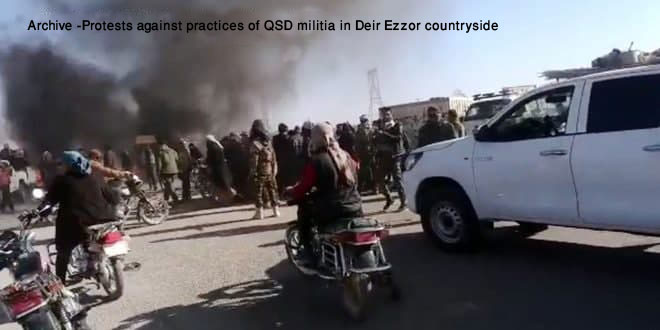 Raqqa, Hasaka, SANA- A number of militants of US occupation – baked QSD militia were killed and wounded in attacks on their vehicles and movements in the countryside of Hasaka and Raqqa.

In the southern countryside of Hasaka, local sources told SANA that an explosive device had detonated in a military vehicle of QSD militia in the vicinity of al-Shaddadi city, injuring a number of the militia militants.

Local sources in Raqqa told SANA that two militants of QSD militia were killed in a blast of an explosive device in  Hamra Balasim town, east of Raqqa city, while a number of other militia militants were injured in an attack with machine guns on their military vehicle near al-Safsafa crossroads in the western countryside.

Meanwhile, QSD militia kidnapped a number of young men in al-Karama area, east of Raqqa, after they raided the area and terrified the people, taking the young men to the camps of recruitment to fight with them.