With a capital of SYP 62.6 billion, 1066 industrial establishments enter phase of production in 2020 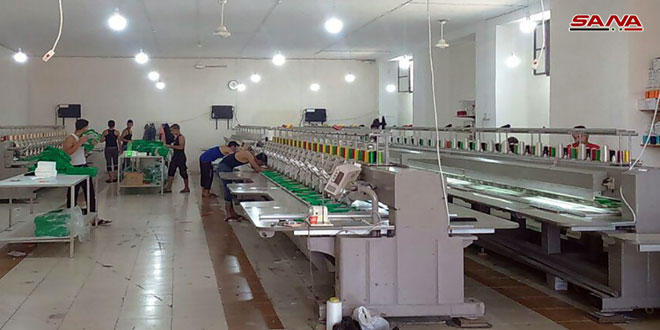 Damascus, SANA- The pace of work and investment in the industrial sector was rated as good due to the facilitations and the procedures adopted by the government in this frame, as about 1066 artisanal, industrial and investment establishments put into services during the past year with a capital of SYP 62.627 billion which are scheduled to provide 4,849 job opportunities, despite of the situation that the country is passing through due to the unilateral coercive measures and the impacts of the coronavirus, the Industrial Investment Directorate at the Industry Ministry said.

In its report for the year 2020, the Directorate pointed out, that there is an increase in the number of the accomplished establishments in comparison with 2019, in which 112 establishments have been accomplished with a capital of SYP 75.2 billion which provided 4988 job opportunities.

In terms of licensing, the report highlighted that the directorates of industry in the provinces have licensed 2,852 artisanal, industrial and investment establishments with a capital of SYP 891.773 billion last year, which will provide about 25,904 job opportunities after they enter phase of production, with a notable increase compared to 2019, as 779 industrial and investment establishments have been licensed during it with a capital of SYP 270.867 billion.

Aleppo province has registered the largest number of licensed facilities with 1216 establishments, then Damascus Countryside province with 850, Hama 192, Damascus 131, Homs 113, Daraa 107, Tartous 78, Lattakia 77, Quneitra 29, Sweida 20, Deir Ezzor 18 and Hasaka with only one, according to the report.

In regard with the industrial establishments which were accomplished according to the Investment Law no. 8, the Directorate said that 17 establishments with a capital of SYP 24.924 billion were implemented which is scheduled to provide 427 job opportunities, among them 8 foods, 7 chemical and 2 engineering facilities. Which are distributed as 4 in Quneitra, 3 in Damascus Countryside, 3 in the Industrial city of Adra and the rest of them in the other provinces.

The directorate added that 17 establishments have been licensed with a capital of SYP 720,5 billion which will provide 3177 job opportunities when they enter the phase of production in the various industrial sectors, asserting that 8 facilities have been carried out in Damascus Countryside and the rest has been implemented in the other provinces.

The report pointed out to the legislative decrees that were issued last year and contributed to supporting the industrial sector, including decree no. 10 for the year 2020 which stipulates for exempting raw materials, imported for local industry, and are subjected to customs’ fees of 1 % out of the Customs tariffs, from the Customs tariffs, and Decree no. 14 for 2020 on exempting production requirements and raw materials used in manufacturing pharmaceuticals for human use from customs imposed on import.