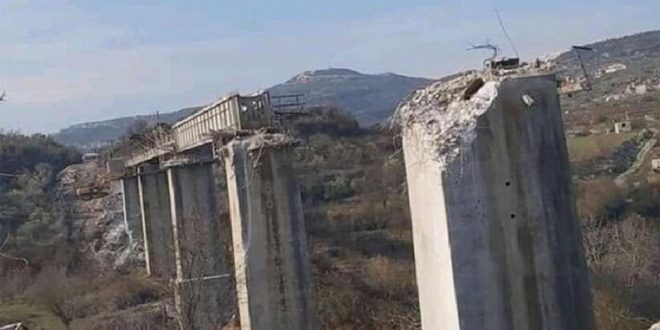 The Ministry of Transport, in a statement to SANA, said that the Turkish regime- backed terrorist organizations dismantled and stole Badama railway bridge connecting the towns of Badama and al-Za’iniyah, which are adjacent to the International Road (M4) on the axis of Aleppo-Lattakia, with a length of 245m and at a height of 18m.

The Ministry added “this subversive act by the terrorist organizations, which comes in implementation of the orders of the Turkish regime and its allies, is a blatant and aggressive violation that is added to the series of crimes and systematic sabotage that they practice against our properties and capabilities, and such acts delay the reconstruction, and further tighten the noose on the Syrian people.”

The Ministry clarified that the Badama bridge is composed of (8) holes, (2) of which are concrete-made holes with a length of 16.5 m while 6 of them are metallic with a length of 34 m each, adding that the terrorists dismantled and transferred them to workshops and special factories for dismantling them, and extracting large quantities of the iron used in the construction of the bridge, in addition to all the iron used in building the railway.

Since the beginning of their aggression on Syrian territory on October 9, 2019, the Turkish occupation forces and their terrorist mercenaries have carried out dozens of robberies and looting of public and private facilities, and they have destroyed the tower of Zeizoun thermal station in Idleb countryside. In addition to stealing water pipelines and the destruction of infrastructure within the occupied areas.