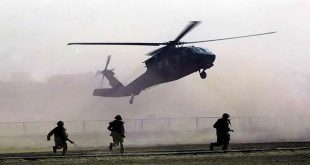 Hasaka, SANA- With the aim of investing in terrorist groups and using them to implement Washington’s schemes in the region, the US occupation forces have transported tens of Daesh “ISIS” terrorists from the prisons which are under the control of QSD militia in Hasaka Province to the basis of the occupation forces in al-Tanf area on the Syrian-Jordanian borders.

Local sources told SANA’s reporter that the US occupation has transported 70 terrorists from Daesh “ISIS” terrorist organization who had been detained at the Industrial Secondary School at the southern entrance of Hasaka City to its illegitimate basis in al-Tanf area.

The sources noted that the US occupation forces in al-Tanf provide a sanctuary for the terrorists in the region and they supply them with weapons and provide the protection for them through transferring them from one place to another to implement their hostile schemes against Syria.

On January 5th, the US occupation transported onboard one of its helicopters 10 of Daesh “ISIS” terrorists who were detained at “al-Bulghar Camp”, east of al-Shadadi City to its illegitimate basis in al-Tanf, and 50 other terrorists from the prison of the Industrial Secondary School in Hasaka.