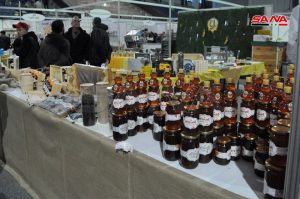 Damascus, SANA- With the participation of 34 beekeepers from the public and private sectors, activities of the 2nd Syrian Honey Festival, which will continue until January 22nd, were launched at al- Jalaa Sport City in Damascus.

The festival, which is held by the Arab Beekeepers Union in cooperation with the Ministry of Agriculture and Agrarian Reform, under the title “Honey … Food, Medicine and Cure” includes the products of the Syrian beekeepers that are quality-guaranteed and subject to analysisو in addition to production requirements, wooden beehives, and medical and food industries from materials produced by bees.

Minister of Agriculture and Agrarian Reform, Engineer Mohammad Hassan Qatana, stressed in a press statement the importance of the festival as it constitutes a step for opening of an exhibition of Syrian bee products, and it contributes to encouraging breeders to return to establishing beehives again and to restore the elegance of this profession.

Minister Qatana stated that five honey testing centers are currently being established in various provinces, and through them, honey will not be allowed to be supplied till analyzing it and attaching the results of the analysis to each package and registering it by the ministry to ensure that the produced honey is reliable and not adulterated.

Director of the Arab Beekeepers Union, Engineer Fattouh Jumaa noted that the aim of the festival is to link the product to the consumer and to shed light on this developmental sector.

A number of the participants in the exhibition expressed in their statements to the SANA’s delegate, underlined the importance of the festival, which lies in introducing the Syrian honey, its quality and types, in addition to allowing the exchange of experiences between the exhibitors.

The number of beehives in Syria currently stands at 350,000, and the current number is still less than the numbers that were available before the terrorist war, which at that time reached 600,000.