From support of terrorism to fraud… Dutch Rutte government resigns 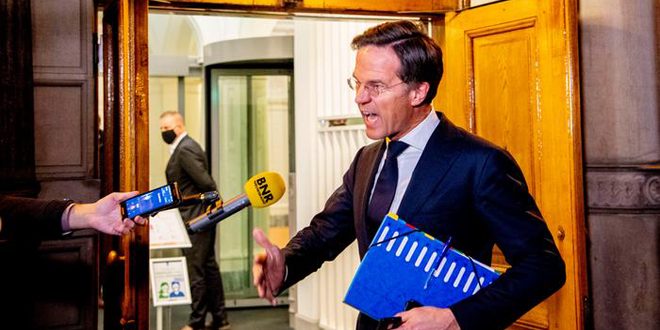 Damascus, SANA- A new scandal is added to the black record of the Dutch government and its prime Minister, Mark Rutte, who was directly involved in supporting terrorism in Syria and the latter’s confession to his personal interference in obstructing parliamentary investigations into providing millions of dollars to terrorists, to a new scandal regarding children welfare fraud and directing false accusations against thousands of families in the Netherlands.

In front of all those disgraceful deeds and scandals, Rutte found no escape from announcing his resignation on Friday.

International media reports made it clear that the new Rutte scandal included his allegations about thousands of families’ fraud to obtain social assistance and child benefit entitlements, as these families, some of whom, were subjected to racial discrimination, were forced to pay tens of thousands of euros back and fall into serious financial crises.

The international media revealed that about 26000 people were affected by that scandal. It was also uncovered that officials within the tax authorities had described the process of “racial discrimination” for about 11000 people based on their possession of dual nationalities, most of them immigrants.

According to BBC report published on Saturday, it said that the victims of the scandal, including mothers and fathers, filed an official complaint against Dutch officials, whether current or former, as the government is scheduled to pay compensation no less than 30,000 euros for each affected father, but parents assert that the compensation is insufficient.