“All Hands On Deck” – Up To 25,000 National Guard Now Authorized In DC For Biden Inauguration This is how the Capitol looks from inside

The National Guard has authorized up to 25,000 Guardsmen around the Capitol complex to support security efforts surrounding President-elect Joe Biden’s inauguration on Jan. 20.

Much of the National Mall will be closed to the public ahead of inauguration day. Armed Guardsmen with M4 carbines will be patrolling the streets around the Capitol, federal buildings, and monuments, including the Lincoln Memorial.

Guardsmen have been briefed about bomb threats and have been authorized to use lethal force if necessary.

Due to unspecified threats, Biden’s rehearsal dinner slated for Sunday has been postponed. The rehearsal is now scheduled for Monday.

Security throughout the Washington Metropolitan Area is very tight as FBI warnings of protests and possibly armed extremists could cause chaos next week. 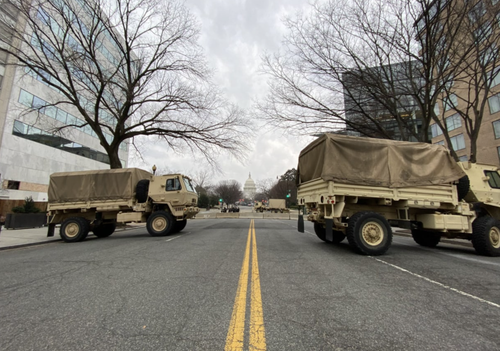 Businesses near the Capitol have boarded up their windows in anticipation of violent clashes between extremists and the Metropolitan Police Department, Secret Service, Park Police, Capitol Police, FBI, and Guardsmen ahead of next Wednesday.

Roadblocks and metal fences have been installed around the area to limit large crowds’ mobility. 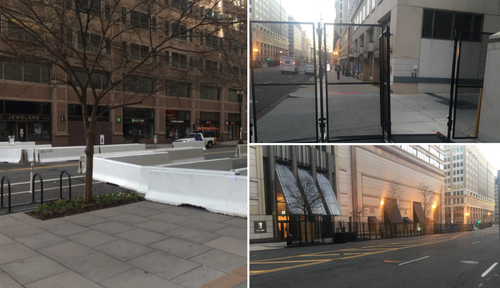 Here’s a map of the roadblocks:

Over the last five days, a metal fence perimeter has been erected around the Capitol building, with thousands of Guardsmen protecting the grounds in a show of force against extremists.

The U.S. House panel sent letters this morning to local businesses asking for their help to prevent violence ahead of Wednesday. They also urged businesses to beef up security because protests may begin as early as this weekend.

Fox News reports large armed demonstrations at or near the Capitol and around other state Capitol buildings will begin on Jan. 17.

D.C. Police Chief Robert Contee told reporters Friday that “all hands on deck” ahead of next week. He said a massive show of force of federal agents and Guardsmen would protect neighborhoods throughout the metro area.

“Our officers can focus on keeping D.C. safe from any aspects of crime, including these extremist groups that have attacked our capital,” Mayor Muriel Bowser said.

To mitigate extremist groups’ ability to attack the Capitol, downtown security has been divided into two zones. The first zone is called the “red line,” attempting to enter the space would require an ID. The second is the “green line” with a soft perimeter and won’t be locked down as severely.

Capitol security is already at an unprecedented level. Still, there are talks that advanced surveillance technology, such as facial recognition algorithms to identify extremists, could be deployed during the inauguration or perhaps in the future.