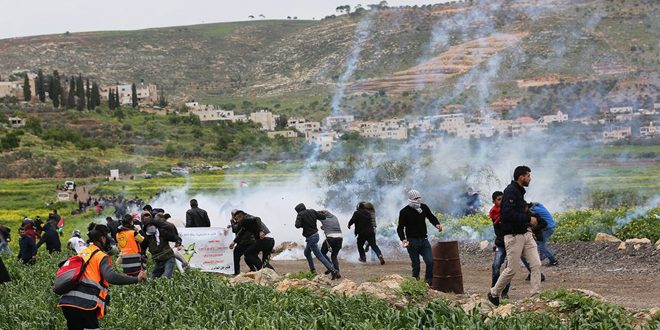 Occupied Jerusalem , SANA- Palestinian youth was injured and many others suffered from cases of suffocation as the Israeli occupation forces tried to disperse an anti-settlement demonstration in Al Mughayir village, north of Ramallah in the West Bank.

Wafa news agency reported that the occupation forces fired bullets, sound bombs and poisonous gas at the Palestinians participating in the demonstration in protest against the establishment of a new settlement outpost on their lands in the Al-Qala neighborhood, east of the village, which led to the injury of a young man while others sustained cases of suffocation.

Al-Mughayir is exposed to daily attacks by the occupation forces and settlers, with the aim of seizing its lands and displacing its people.