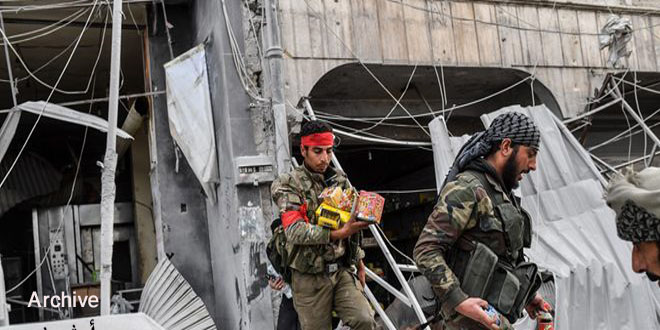 Hasaka, SANA- Mercenaries of the Turkish regime of terrorist organizations have continued their criminal practices against the civilian citizens within the areas which they occupy in Hasaka Countryside as the mercenaries seized a number of the shops and they turned them into weapon depots.

Local sources told SANA reporter that over the past days, mercenaries of the Turkish occupation seized several shops in Ras al-Ayn City after expelling their owners from them at the gunpoint and after plundering their contents and turning them into depots of weapons and ammunition.

The sources noted that such criminal practices have continued recently in different areas, particularly in Ras al-Ayn Countryside in cooperation with Turkish arms dealers and under the cover of the Turkish occupation forces, with the aim of expelling the locals from their homes and shops and displacing them outside their city.

Previously, the Turkish occupation forces and their mercenaries had seized dozens of houses by force of arms and through the repeated bombing of residential neighborhoods in the city of Ras al-Ayn on and they expelled their original owners from them, before the Turkish regime authorities later transported dozens of families of their mercenaries by buses from several areas and settled them in these homes.