On the same day that House Democrats introduced an article of impeachment against President Trump on Monday for “incitement of insurrection” following a group of his supporters attacking the Capitol last Wednesday, something odd has happened on the U.S. State Department website under the president’s bio where it now says “Donald J. Trump’s term ended on 2021-01-11 19:49:00.” 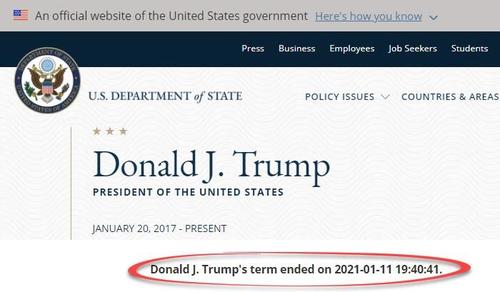 Abramson said, “FWIW, I accessed the site at 3:02 PM ET, so the time in the screenshot above (7:49 PM) is not—as some are saying—UTC time. There may well be a computer glitch here, I don’t know. Other screenshots have shown other times. But all are today, and State has not explained it yet.”

He then said, “Regardless of time-stamp, it’s not clear why the State Department would edit this presidency’s official biography in *any* way that would say it ended on January 11—let alone do so on a day the House tried to get the Vice President to become Acting President. It is bizarre.”

However, maybe it’s not so bizarre considering BuzzFeed’s Christopher Miller has confirmed with sources that a “disgruntled staffer” is behind the bio change of President Trump and Vice President Pence. 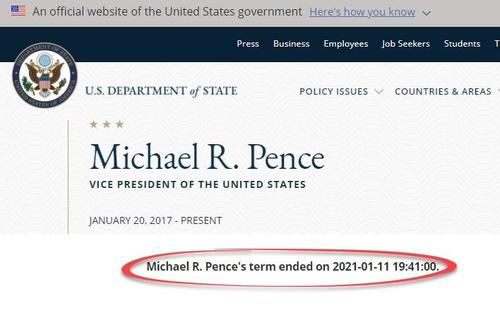 Buzzfeed reports that an investigation into the matter could be a challenge, considering how many people have administrative access to the content management system used for the State Department’s official website.

It’s a “closed system” that is “nearly impossible to hack,” said one of the diplomats.

Which makes us wonder – isn’t altering the President’s bio an “attack on American Democracy”? Or is it a ‘Threat’?