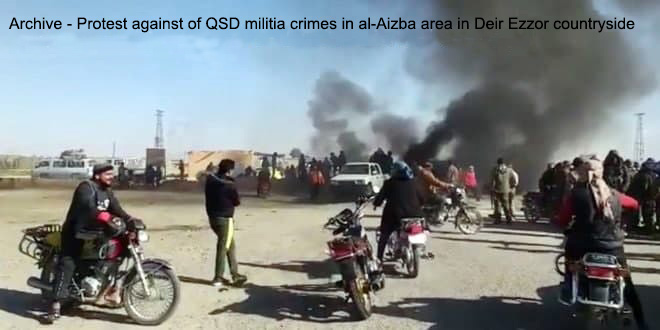 Hasaka/ Deir Ezzor, SANA – Six of US occupation –backed QSD militia gunmen were killed and others were injured in attacks on their movements and positions in Hasaka and Deir Ezzor countryside in less than 24 hours.

Local sources noted that unknown person has detonated a bomb in an armed group affiliated to QSD militia after killing one of its militants by a pistol in the third section inside al-Hawl camp in Hasaka eastern countryside, causing the injury of the patrol’s militants, including a leader.

The sources added that unknown persons carried out attacks on QSD militia in the fourth section, claiming the life of a leader affiliated to the militia. Then QSD militia brought in military reinforcements and launched raid campaigns on the second and fourth section of the camp in coincidence with the killing of two militants and injury of 4 others by fires of unknown persons in the vicinity of al-Hawl camp, east of Hasaka city.