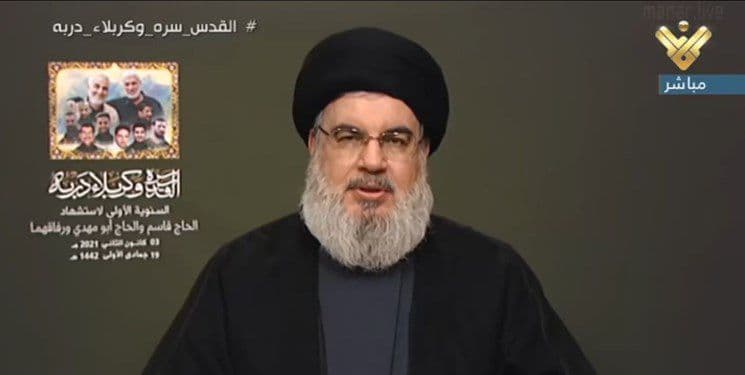 ISWNews Analysis Group: The Secretary General of the Lebanese Hezbollah spoke on Sunday evening on the anniversary of the martyrdom of the resistance martyrs General Soleimani and Abu Mahdi al-Mohandes.

Hezbollah Secretary General of Lebanon: The greatness and oppression of the martyrdom of Haj Qassem Soleimani and his allies will remain in history.

Perhaps we can consider the funeral of Hajj Qasim Soleimani and Hajj Abu Mahdi the greatest funeral in the history of mankind.

Iran did not forget the resistance and Lebanon during the Zionist regime’s war against Lebanon, despite Saddam’s imposed war against them, and supported the Lebanese government and people in the Syrian war.

Iran and Syria have been the main supporters of the resistance since 1982, and Imam Khomeini sent a delegation from the Iranian army to Lebanon to prevent Israel from advancing.

Hezbollah is one of the most independent resistance movements in human history.

Iran is a strong and capable country that responds to aggressors wherever it wants without the need for allies and forces in the region, just as it targeted the Ain al-Assad base, which hosted US troops, after the martyrdom of General Soleimani.

The axis of resistance becomes stronger, more serious, and more vigilant whenever it loses command.

If Iran considers Haj Qassem Soleimani a national hero, we in Lebanon and Hezbollah consider him a hero of sacrifice, loyalty and defense of the oppressed in the world and the Islamic world; Because he worked and sacrificed not only for the Shiites but for all Muslims and non-Muslims.

The actions and achievements of Martyr Soleimani are many and what has been said and revealed about them is small and there are issues that can not be talked about.

Retaliation for the killers and perpetrators of the assassination of martyr Soleimani and his companions is the duty of every free and honorable human being.