Tow militants of QSD killed, others injured in blast of explosive device in Hasaka countryside 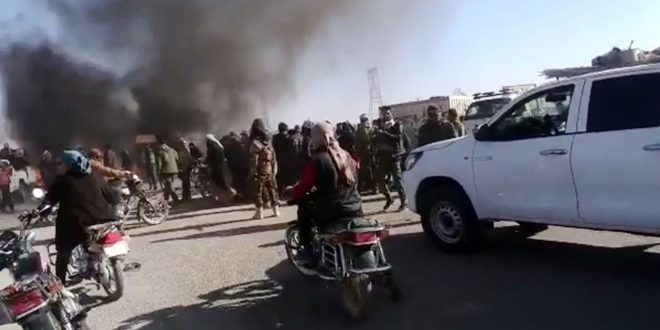 Hasaka, SANA- Tow militants of US occupation-backed QSD militia were killed by targeting their vehicles and their movements by unknown assailants in Hasaka countryside.

Locals sources told SANA reporter that unknown persons targeted by an explosive device a vehicle of QSD militia in the vicinity of Abou Rasin city, west to Ras al-Ain city, killing one militant and injuring others.

The sources indicated that a number of militants of QSD militia were injured in an explosion of an explosive device planted by unknown persons in a military vehicle on Tishreen Fields road, east to Hasaka.

Meanwhile, a woman working with QSD militia was killed while she was inside the fourth section of al-Hawl camp where the US occupation forces and their militias detain tens of thousands of civilians.

Local sources told SANA that militants of QSD militia set up on Tuesday dawn checkpoints in the vicinity of Markada town in Hasaka southern countryside, kidnapping several teachers and taking them to training camps to force them fight in their ranks coercively.