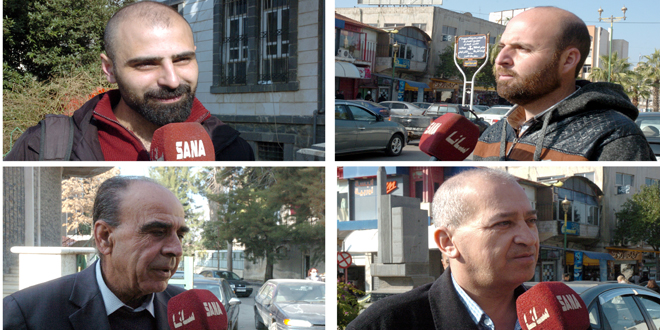 Sweida, SANA- Locals in Sweida province affirmed that the terrorist attacks on transport means in the Syrian al-Badia “semi-desert” region, which have led to the martyrdom and injury of a number of citizens and army personnel over the past days, are a part of the continued American war on the Syrian people through the siege and support provided to terrorism, asserting their standing by the Syrian Arab Army to completely eliminate the remnants of terrorist organizations and their cells in the Syrian al-Badia.

Citizen Mamoun Ghanem stated in a statement to SANA reporter that those who stand behind these brutal attacks seek to revive the remnants of terrorist organizations in order to undermine the stability in the safe areas and to intimidate the civilians, affirming that the Syrian people and their heroic army will remain steadfast till the liberation of every inch of the Syrian territories.

Zaid Karbaj, an agricultural engineer, said that the Turkish occupation and the colonial powers are working to revive the remnants of terrorist organizations, and to supply them with money and weapons to ignite more tension and terrorism and to tighten the noose on the Syrian people.
Karbaj affirmed the need to eliminate terrorism and to uproot it through continuing to fight it, and through the solidarity between the heroic Syrian Arab Army that defends the homeland and the steadfast Syrian people who adhere to their homeland.

Citizen, Fawzat Abu Sa’ad, considered that the terrorist attacks cannot be separated from the unjust economic siege imposed on the Syrian people, as the battle continues and the enemies of the homeland do not want Syria and its people to live in safety and stability.