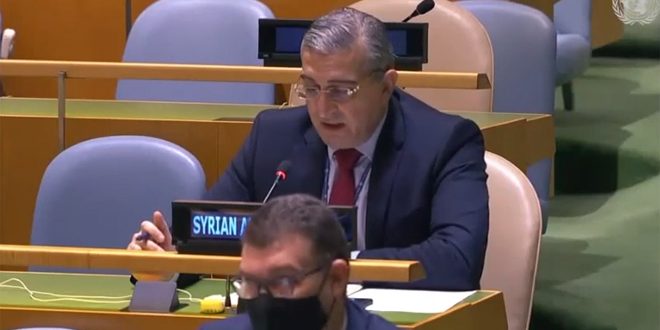 New York, SANA- Syria has affirmed that the international cooperation in the face of the coronavirus entails from some countries to review their policies which are based on the aggression and on imposing unilateral coercive measures, the siege and the collective punishment on the nations, and it entails uplifting the principles of the international law and the provisions of the UN Charter.

In a speech at the 31st Special Session of the United Nations General Assembly in Response to the Coronavirus Disease (COVID-19 Pandemic), Minister-Counselor Qussai al-Dahhak, member of the permanent Syrian delegation to the United Nations, said that Coronavirus pandemic has proven the correlation between our nations and states and our unity in the face of a challenge that hasn’t differentiated between a small or a big country or between a developing or an advanced country which proves again the urgent need to reconsider and reinforce the mechanisms of collective work, in addition to activating means of international cooperation and solidarity in the face of humanitarian crises.

“This also proves that some states should review their policies which are based on aggression and on imposing unilateral coercive measures, siege and collective punishment on the nations, and that they shouldn’t go far in their mistakes, in addition to the necessity to promote the principles of the international law and the provisions of the UN Charter,” al-Dahhak added.

He expressed regret over politicizing the issue of international cooperation for combating the novel coronavirus by some states, and the attempts to foil this cooperation by those who have sought to use this pandemic as a tool to settle accounts with certain states, indicating in this regard that Syria has suffered from politicizing many humanitarian and developmental issues by hostile governments who have used these issues as a weapon and a tool to serve their agendas and schemes which target Syria and the region.

“Despite of the harsh economic and living conditions imposed by the novel coronavirus, some member states and regional blocs have continued to impose unilateral coercive measures on many member states including Syria, in disregard for the appeals by the UN Secretary General and UN senior officials who have called for ending these illegal measures which have limited the ability of the Syrian institutions to address this pandemic despite of that the Syrian Government exerts utmost efforts in this domain,” al-Dahhak said.

He added that “Talking about the impacts of the coronavirus and the international cooperation to confront it entails the call for enhancing the international efforts under the umbrella of the UN in order to face the gross challenges which threaten the international security and peace and hinder the implementation of the goals of sustainable development for the year 2030, and this entails combating terrorism and drying up its financing resources and the accountability of the governments which support terrorism, in addition to ending the occupation and putting an end to what is associated to it of the acts of aggression and the criminal acts and the plunder of the resources  including the US, Turkish and Israeli occupation of parts of the Syrian territory.”

Al-Dahhak affirmed that the Syrian state works on guaranteeing the dignified, safe and voluntary return for the displaced to their homes, as it has exerted relentless efforts in cooperation with friendly countries and its partners in the field of humanitarian work to restore security and stability and to create suitable conditions for the return of the displaced and the reconstruction of what has been destroyed at the hands of terrorists.