Citizens of Golan, Quneitra vow to continue fight until liberation of occupied lands 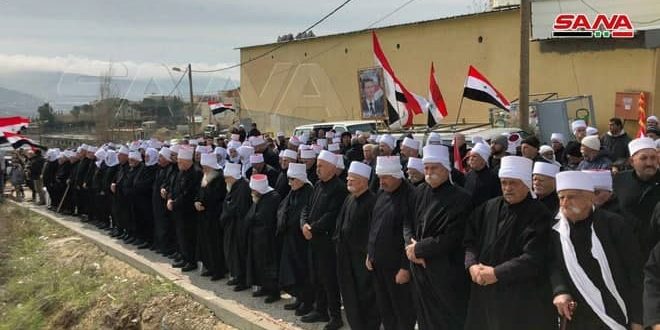 Quneitra, SANA_ 39 years have passed since the ill-famed decision of the occupation authorities to annex the occupied Syrian Golan, and the people of the Golan in particular, and the Syrians in general, are still more determined on defeating the occupier and liberating the land and adhering to the Syrian national identity.

Our citizens in Quneitra and the occupied Golan affirmed in a statement to SANA that they will continue the fight to confront the Israeli occupation, its polices and its aggressive expansionist schemes in Golan.

They clarified that the ominous decision of annexation is illegal and has no legal value as it will not change anything of the facts of history and geography that the Golan has been a Syrian land.

Suleiman al-Maqet, the father of the freed detainee Sedqi al-Maqet, said in a statement to SANA that the locals of the occupied Golan have foiled the expansionist settlement policies of the occupation and refused the Israeli identity and laws.

He renewed adherence of our citizens in Golan to their lands and their belonging to their homeland, Syria.