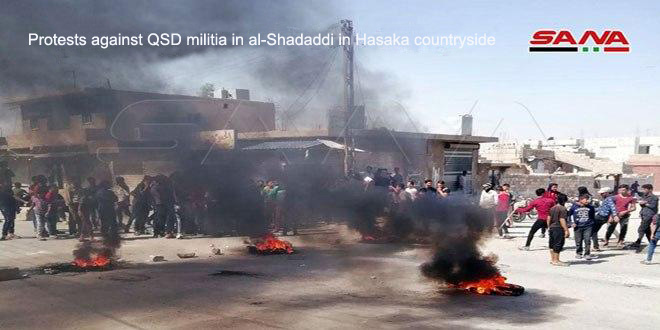 Hasaka, SANA – The attacks on US-backed QSD militia positions increased over the last two days, where two of them were killed and others were injured in attacks with machineguns that targeted its checkpoints in the Syrian Al-Jazira region.

Local sources told SANA that a QSD militant was killed on Saturday in an attack with machine guns targeted a military vehicle affiliated to QSD militia on al-Khrafey road, south Hasaka.

Over the past few days, a number of QSD militants were killed and others were injured in separate attacks carried out by unknown persons on their movements within the areas they occupy with US support near Abo Qubie, west of Raqqa and towns of al-Tayyana Zeban in the east of Deir Ezzor and the vicinity of Abo Rasin town in Hasaka northern countryside.