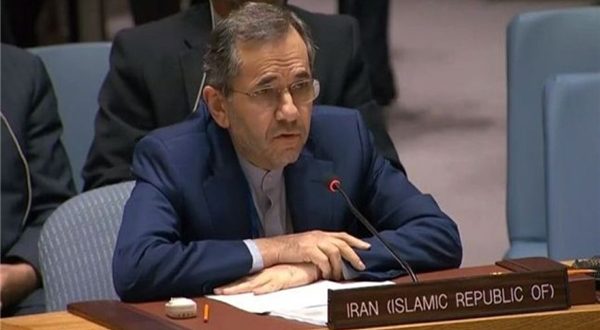 New York, SANA- Iran’s Permanent Representative to the United Nations, Majid Takht Ravanchi affirmed the necessity of the full respect for Syria’s sovereignty and the withdrawal of all the illegitimate foreign troops deployed on its land, noting that some states seek to prolong the crisis in the country.

Fars News Agency quoted Ravanchi during a session of the International Security Council on the situation on Syria on Wednesday as saying that “some states impose unilateral coercive measures against the Syrian people, and hinder the international efforts which aim to achieve the return of the Syrian refugees, in addition to blocking the political process in order to prolong the crisis in Syria and impose their will on the Syrian people.”

“The US troops occupy parts of Syria under the pretext of combating terrorism, and they support some terrorist groups such as Jabhat al-Nusra while it is busy pillaging the oil and the resources of the Syrian people, “Ravanchi added.

He noted that in a time when the Syrian people are suffering from the pressures which have resulted from the outbreak of the novel coronavirus, the unilateral coercive economic measures imposed on them further increase their suffering, affirming that these measures are doomed to failure as they are illegal and inhuman.

Ravanchi welcomed the exerted efforts for finding a political solution to the crisis in Syria, indicating that in line with this track, the required support should be provided for the reconstruction in the country and the return of the refugees and displaced to their areas.

He condemned the continued Israeli acts of aggression against Syria, affirming that the occupied Syrian Golan is a Syrian land and that the visit of the US Secretary of State Mike Pompeo represents a provocative step.