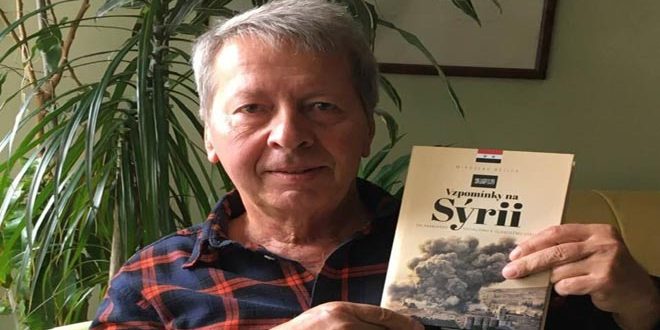 Prague, SANA- Former Czech diplomat, Miroslav Belica, has stressed that Western governments bear the essential part of the responsibility for the crisis in Syria and for the suffering in it as they have spent billions of dollars on arming and financing armed terrorist organizations and on the media war against Syria.

In his new book which was published in Prague under the title “Memories of Syria”, Belica noted that the war and the foreign interference in Syria’s affairs has caused   huge humanitarian tragedies in it, affirming that the so-called “Arab Spring” hasn’t achieved anything positive for the region and even this name was originated in the West and not in the Arab countries.

In the book, which consists of 489 pages and dozens of photos, Belica talks about the deep-rootedness of the Syrian-Czech relations, his impressions of Syria, where he spent four years working at the Czechoslovak Embassy in Damascus, and the history of Syria up to the contemporary period.

Belica worked as a diplomat in the Middle East for 15 years, during which he also held the position of Chargé d’affaires at the Czech Embassy in Iraq and Deputy Director of the United Nations Department in the Czech Foreign Ministry.