Syrians abroad: Success of presidential election entitlement victory of Will of Syrian people 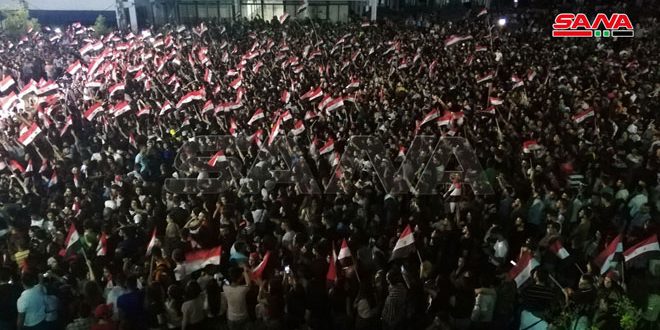 Syrians abroad: Success of presidential election entitlement victory of Will of Syrian people

Capitals, SANA- Syrian expatriates in Sweden extended their congratulations over the success of presidential election and the winning of Dr. Bashar al-Assad to the post of the President, voicing their loyalty to their homeland.

A joint statement by 15 expatriate activities including representatives and members of social and cultural clubs, the Syrians in Sweden said the results of the election affirm that the Syrian people chose “Syria, the future, the strong which is capable of restoring its rights.”

The events described the elections as great historical moments despite of the terrorist war that the country has been exposed to during the past years.

In turn, the Central Committee of the Belarusian Communist Party expressed its congratulations over the completion of the presidential election and the winning of Dr. Bashar al-Assad.

The committee, pointed out that the result of these elections embodies the Syrian people rejection of foreign interference in their internal affairs and constitutes a victory for their choices and their will to adhere to their independent decision and the sovereignty of their country.

It stressed that the results of the voting in the elections showed indisputably the Syrian citizens’ confidence in the approach of leadership of President al-Assad, which aims to protect Syria from foreign interference in its internal affairs, as well as to realize stability in the country.

The committee expressed the Belarusian Communist Party’s desire to strengthen and continue the Belarusian-Syrian friendly relations for the interests of the peoples of the two countries.

Meanwhile, the Muslim Unity Council of Pakistan considered that the Syrian presidential elections constituted a victory for peace and Syrian national sovereignty over the terrorist war imposed on the Syrian people.

The party expressed its confidence in President al-Assad ability to revive Syria and rebuild what was destroyed by the forces of black terrorism and aggression.

The party pointed out that the Syrian people proved once again through their wide participation in the presidential elections that despite all circumstances and adversities, they can achieve their will and can outline their future without any external interference.