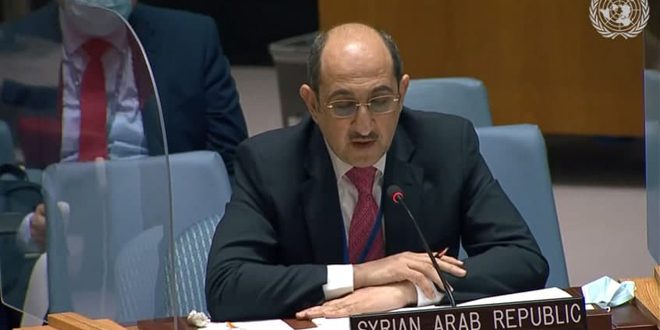 New York, SANA-Syria’s permanent representative to the UN, Bassam Sabbagh, said that Organization for the Prohibition of Chemical Weapons (OPCW) has turned into a tool in a geopolitical game led by the US and its western allies.

“The unprecedented decision, adopted by Conference of States parties to the OPCW in late April, was a clear evidence to the volume of manipulation, politicization and pressures practiced by those countries inside the Organization,” Sabbagh said during a UN Security council session.

“Syria rejects the pressures exerted by those countries and considers them as a mere means for the political blackmail,” Sabbagh added.

He added that countries which support terrorists have deviated attention, for many years, from their use of chemical, toxic materials and exerted pressures on the OPCW inquiring teams to impose the agendas of those states.

Sabbagh went on to say that Syria persisted to provide the UN and OPCW with information about the terrorist organizations’ possession and transporting  of chemical and toxic materials to fabricate chemical scenarios and accuse the Syrian Arab Army.

He stressed that Syria has lately provided the UN Secretary General with information that prove terrorist organizations’ use of chemical weapons in Khan al-Assal in 2013.

“Experts of the Syrian national commission, during consultations held with evaluation teams, present vocational explanations that support information declared by Syria, and it is unacceptable to direct precedent accusations about issues which still under discussion,” Sabbagh said.

He reiterated that Syria categorically rejects suspicion by some sides about its cooperation with the OPCW technical secretariat and the deliberate ignorance of the progress being fulfilled.

“Syria has fulfilled its commitments regarding its access to the Chemical Weapons Convention and it has eliminated its stockpile and destroyed facilities and its production with a record time during difficult circumstances,” Sabbagh affirmed.