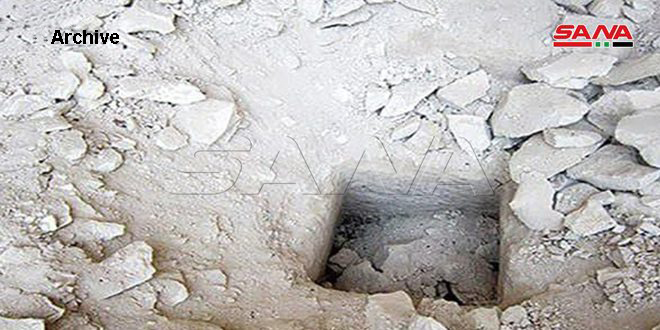 Aleppo, SANA- Turkish occupation mercenaries continued their organized criminal practices against the Syrian heritage, as they started new excavations for antiquities under direct Turkish intelligence supervision in the occupied Afrin area in Aleppo northern countryside, as part of the plots of the Turkish occupier to empty the area of its cultural identity after displacing its original inhabitants.

Civil sources told SANA that terrorist groups of the Turkish occupation mercenaries began digging and bulldozing several sites on the outskirts of the Nabi Huri castle in Afrin area in Aleppo northern countryside, in search for antiquities and pieces, using modern equipment supplied by the occupation authorities, which directly supervise the excavations.

The sources pointed out that the process of searching for and stealing antiquities in Afrin is carried out systematically and managed by the Turkish intelligence, which controls the terrorists deployed in the region and instruct them to search for antiquities to smuggle and sell them to Turkish brokers who, in turn, sell them to antiquity dealers and smugglers from different countries.

Foreign and Expatriates Ministry has repeatedly condemned the illegal digging and excavation of antiquities carried out by US, French and Turkish forces and their agents in Manbij, Afrin, Idlib, Hasaka, Raqqa and other areas.