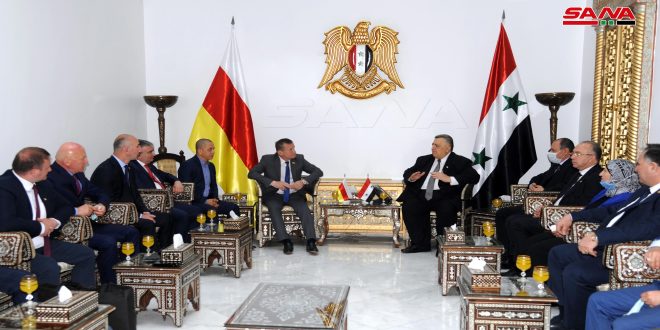 Damascus, SANA-Speaker of the People’s Assembly, Hammouda Sabbagh, discussed on Tuesday with President of the Parliament of the Republic of South Ossetia, Alan Tadtaev, means of enhancing and developing Syria-South Ossetia parliamentary relations and pushing them forward in a way that achieves the interests of the two friendly peoples and countries.

During the meeting, Sabbagh called for the exchange of delegations and parliamentary experiences between Syria and South Ossetia, in addition to the development of relations and on various issues.

He thanked delegation of south Ossetia for responding to the invitation addressed to it to keep up with the presidential elections in Syria.

For his part, Tadtaev, affirmed the elections are of great importance in achieving stability and developing situation in the country that has overcome many difficulties.

He affirmed the determination of his country’s leadership and people to continue supporting Syria.