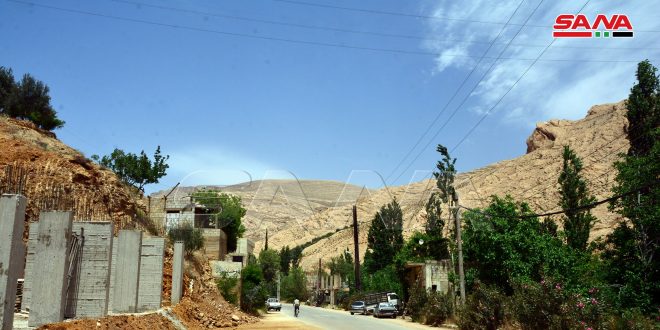 Damascus Countryside, SANA- The features of normal life have been returning gradually to Bassimeh village in Barada Valley region in Damascus Countryside with the return of 20 families who have started to renovate their houses after preparing the infrastructure and the basic services by the bodies concerned.

Mazen Refaie Abu Hassan, who returned to Bassimeh at the beginning of the month of Ramadan, continues the cleaning and moving the debris in his home with great vigor.

“returning to my house is a dream that has not left me for years, and today it has become a reality and I hope that all the people will return in less than a year,” Abu Hassan told SANA’s delegate.

Mayor of Bassimeh Mustafa Nasrallah, who was one of the first to return and he has accomplished a large part of the renovation of his house, in turn, explains that the cleaning of homes and streets is proceeding with full support by the governorate by securing the necessary mechanisms.

“I have been waiting for this moment for years,” with these words, Ihsan Mohiuddin al-Qadiri summarizes his happiness to return, indicating that he is working to rehabilitate his house and move the rubble and will do everything he can with the participation of the people to make the village better in terms of tourism, economical and agricultural.

Meanwhile, Hussam Imad noted that removing the rubble and the rehabilitation of houses in the village is taking place at an accelerated pace.

On April 13th, the locals of Bassimeh village have begun to return to their houses which had been damaged by terrorism, to start the process of renovating them and cultivating their lands, after Damascus countryside Governorate, in coordination with the local council, had completed the infrastructure works.

Head of local council in Jdeidet al-Wadi, Tayseer Mawazini said that about twenty families have returned and the number has increased since the beginning of Ramadan.

On January 2017, the Syrian Arab Army announced the return of security and stability to the towns and villages of Barada Valley in Damascus countryside, after of a series of successful military operations.