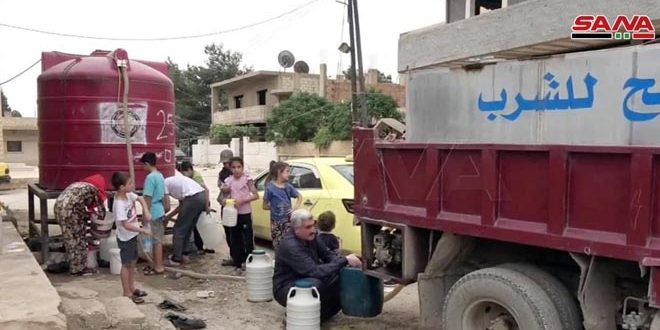 Damascus, SANA- Syrian Arab Red Crescent (SARC)- branch in Hasaka has doubled the amounts of drinking water which are being transported to people of Hasaka city through tankers in order to secure their need of water with the increase of temperature as the Turkish occupation and its mercenaries continue their criminal practices against Hasaka’s people , and deprive the city from drinking water pumping from Alouk water station for the 15 th day in a row.

Head of branch in Hasaka told SANA reporter that increasing the amounts of water comes in response to demands of people as the amounts were raised from 650 cubic meters per day to 1,300 cubic meters per day, affirming the continuation of the efforts of SARC branch with donors to increase the number of water storage tanks installed in Hasaka’s neighborhoods during the upcoming period to ensure drinking water to the city , in the event of an emergency situation occurs.

15 tankers to transport drinking water to Hasaka by SARC branch in Hasaka to be emptied in large water storage tanks numbered 150 with a capacity of five cubic meters installed in the city’s neighborhoods.