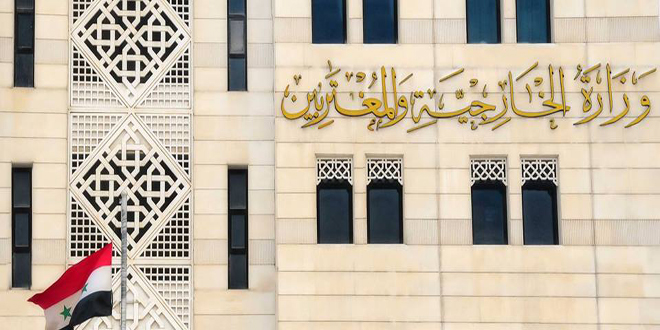 Damascus, SANA-Syria has disapproved what has come in the statement of High Representative of the Union for Foreign Affairs and Security Policy about a report released by the Organization for the Prohibition of chemical Weapons on the alleged incident of Saraqeb.

“Syria disapproves what has come in the statement of High Representative of the Union for Foreign Affairs and Security Policy about the report released by the illegitimate so-called Investigation and Identification Team on the alleged Saraqeb incident and rejects it in form and context,” Foreign and Expatriates Ministry said in a statement on Thursday.

The Ministry added that EU High representative’s statement is full of falsies and stances which are far from reality and logic and it keeps up with a hostile, provocative method adopted by the EU for the past 10 years.

It added that the stance of EU towards that report is an uncovered way with the aim of justifying the terrorist war on Syria.

“Time has come for the EU and a number of its countries to adopt a method which is far from this institution of a colonial feature, and to stop interfering in the domestic affairs of countries and respect the sovereignty and independence of Syria,” the Ministry added.

It said that Syria stresses in that domain that it has never used chemical weapons in Saraqeb or in any other town on the Syrian territory, and at the same time Syria rejects the use of this kind of weapon in any place and by any side and under any circumstance.