Mikdad: the US, its allies changed OPCW into a tool to pass political targets against Syria 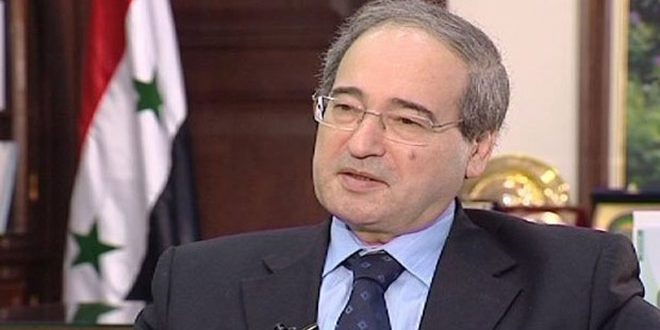 Damascus, SANA-Foreign and Expatriates Minister, Fayssal Mikdad, affirmed that Syria has fulfilled all its obligations according to its access to the Chemical Weapons conventions despite the difficult conditions it was passing through.

“Syria and many other countries have acknowledged that the states which supported and funded armed terrorist groups in Syria, on top, the US, France, Germany and Britain, will sue the Syrian chemical file and the Organization for the Prohibition of Chemical Weapons, OPCW, to achieve their hostile targets against Syria,” Mikdad said during a meeting with Ambassadors and diplomatic missions accredited in Damascus.

Mikdad pointed out to the allegations of western states and the so-called group of “the White Helmets” who fabricated scenarios of using chemical weapons to accuse the Syrian Government of, adding that the same countries have established the so-called “Investigation and Identification Team” to fabricate reports that suit the hostile targets against Syria.

“That was very obvious in the forged report of that team about Ltamneh alleged incident of 2017 and the other report about Saraqeb in 2018 which included false conclusions that represent another scandal for OPCW,” Mikdad added.